“Put that in your article,” Dee said, leaning across the small window table at An Hy Quan as she lauded the presence of peas (“the peas really make it”) in the steamed buns that sat between us. An Hy Quan is housed in an easy-to-miss, unassuming building on Juan Tabo, a street I don't have much occasion to travel unless I'm visiting my dear friends, Dee and Alex. When we weren't coming up with adjectives to describe our food (“piquant,” “pillowy,” “delicate”) we discussed the supposedly poor conditions at the neon work farm of trapper keeper artist Lisa Frank in Arizona (as posited by Jezebel in an article coolly titled “Inside the Rainbow Gulag”) and rehashed some jokes that were made in poor taste while stranded at a gas station. Visiting these two is enough of a reason to soldier to the Northeast Heights, but An Hy Quan's menu of creative vegetarian Vietnamese food is another.

Despite knowing of its existence for some time, this was my first visit to An Hy Quan. After some pleasant banter with our waiter, who was, incidentally, also the owner, we ordered deep fried egg rolls and steamed buns with vegetable filling for starters, and because someone else was picking up the ticket, I ordered coconut water to drink. The coconut water was served in glassware reminiscent of a milkshake, with a spoon resting gently against the rim; thick spirals of coconut flesh floated in it. This beverage-come-appetizer was amazingly bright—lighter and not quite as sweet as the tall aluminum cans of coconut water I'm used to. The steamed buns and egg rolls arrived shortly thereafter. The buns were doughy and stuffed with Chinese black mushrooms, cooked greens and wheat gluten seasoned like pork. “Say that we loved them,” Dee told me before the topic of conversation veered in the direction of grant writing. The egg rolls were less impressive, though, truthfully, I've never had a bad egg roll. There were no surprises with these—just straightforward vegetable stuffed egg rolls served with a sweet chili sauce. I ate them happily.

Reviews and food for thought

​An Hy Quan is a reason to dine in the Heights 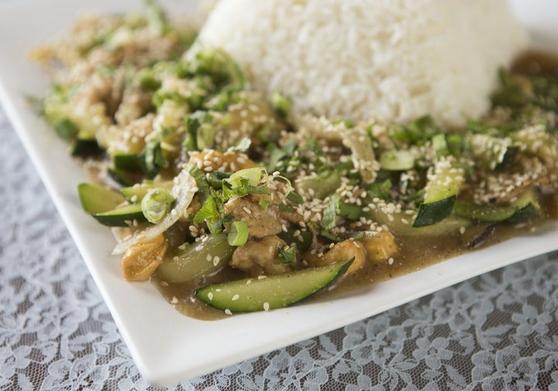 Despite being tempted by specials that reflected the French influence on Vietnamese food such as a French onion soup, I asked the waiter for his suggestion and without hesitation, he pointed to the cashew mock pork with rice. Equally decisive, I ordered it. It was a safe suggestion, because I can't imagine any omnivore not enjoying the chewy hunks of protein bathed in a thick, salty gravy, crushed cashews on top and a heaping portion of rice on the side. Dee and Alex were equally pleased with their selections, crispy chow mein and vegetarian pho, respectively. An Hy Quan was particularly successful in creating a flavorful vegetarian pho broth with high notes of anise, a quality Dee had been hunting for for some time.

It was my second visit to An Hy Quan that confirmed my devotion, however. It was a Tuesday night, and a small group was leaving as I walked in, leaving me the restaurant to myself. A child sat near the kitchen doing homework; it was very quiet. I ordered a papaya salad to start. In my notes about this dish, I simply wrote, “crazy good.” Comprised of firm slivers of papaya in a light chili sauce, topped with fresh basil and crushed peanuts, this is something that I would literally eat everyday. I at least got to eat it two days in a row, because the servings at An Hy Quan are sizable. Delivered with the salad was a plate of fried potato starch chips with a bowl of chili sauce—“chips and salsa,” the owner remarked as he set them down. It was kind of difficult to set them aside to leave room for the main course.

When my clay pot bean curd with pineapple arrived I was already a little full. I ordered it because it sounded interesting, not because it appealed to what I think of as my usual tastes. After tasting the sweet fruit in its thick, savory sauce, however, I think I'll find it difficult to order anything else on my next, of hopefully many, visits to An Hy Quan. Cabbage, rice and carrots were served on the side and added a nice variety of textures to the dish.

By the time I was preparing to leave, others were filing in. I paid the $14.47 bill—a price tag that afforded me multiple meals—and headed for the door. As I made my way out, I heard other patrons telling the waiter how incredible their food was, so I can only imagine that I'm not the only one to have this experience; in fact, I'm certain this reaction is commonplace at An Hy Quan. 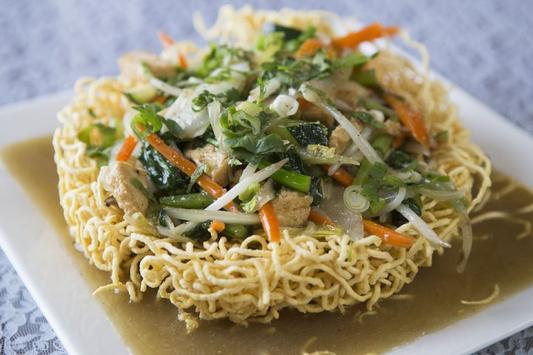 Trekking to the Mountains